São Miguel is the largest and highly populated of the islands with over 50% of the Azores' 250,000 inhabitants living here. As such it is also the transport and communications centre of the Azores with the archipelago's main airport located outside the capital, Ponta Delgada.

The island is sometimes referred to as the 'Green Island' being largely covered with fields and meadows in the lowlands. The backbone of the island is forms a monogenetic volcanic field containing over 270 volcanoes. These caldera of some of these volcanoes have formed into some stunning lakes, most notably Sete Cidades. 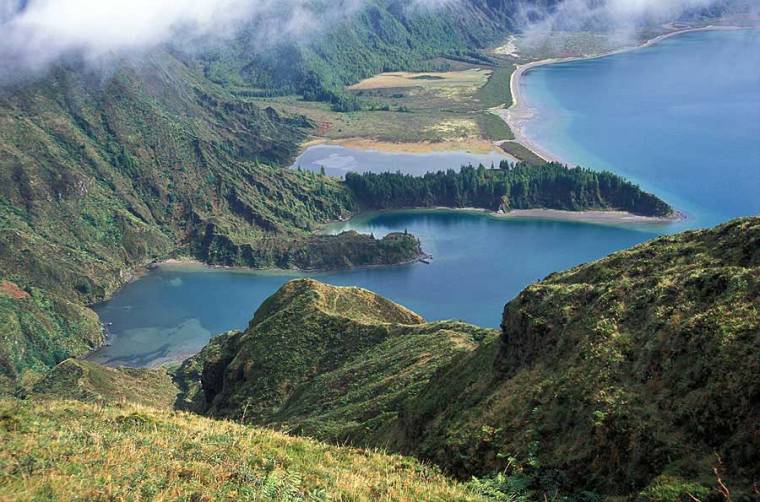 Lagoa do Fogo on Sao Miguel

Sete Cidades (Seven cities) is composed of two lakes measuring around 5Km by 2Km. The crater rim is some 500 metres above the lake and covered in lush vegetation. The lakes are named Lagoa Azul (blue lake) and Lagoa Verde (green lake) owing to the former reflecting the colour of the sky and the latter the colour of the vegetation.

Legend has it that the 2 lakes were formed when a princess and her lover, a young shepherd had to part from each other. The lakes were formed from the tears they shed and the water is the colour of their eyes.

The main city of Sao Miguel, and indeed the Azores, is Ponta Delgada with a population of around 50,000. Built along a bay on Sao Miguel's south coast, Ponta Delgada was originally a fishing village. It later became the island's main port bringing with it the custom-house soon after which it became the island's capital. Since then development (in relative terms) was rapid with the building of various fortifications to protect the town from corsairs and the general expansion of the town in relation to its economic prosperity. The 16th century Forte de São Brás and Mãe de Deus fortresses are worth a visit. 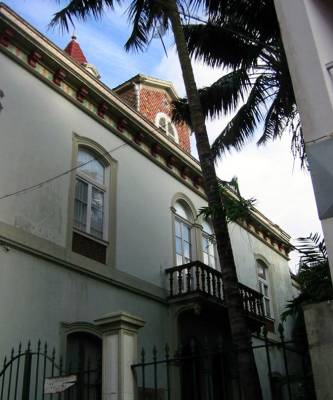 The city is well equipped for tourists with a number of quality hotels, restaurants and bars. There are plenty of historic monuments, palaces, fine houses and churches in Ponta Delgada. Amongst the city's finest sights are its churches. The 1547 parish church of São Sebastião has a fine mix of architecture – Gothic in style with a Manueline façade and two Baroque doorways. Inside is an impressive high altar of carved wood and embroideries in gold thread. Other churches include São Pedro and the early 18th century São José, with it's Latin-American influences.

The Carlos Machado Museum is housed in The Saint André Convent and is home to a wide range of permanent exhibitions including Azorean life and ancestry, natural sciences, fine art and regional arts and crafts.

Ponta Delgada has a substantial marina which harbours boats from all around globe. As well as being home to all the facilities you'd expect such as the yacht club, the marina is also the location of the town's swimming pool. In the evenings, especially during the summer, the nearby Infante Dom Henrique Avenue is popular for a seaside promenade.