Considered not only one of the wonders of Portugal but indeed of Europe, Sintra is truly a gem. Once the royal town of the country, it now deservedly holds UNESCO world heritage status and attracts hordes of visitors throughout the year. Its unusual geography, nestled in a stretch of hills surrounded on all sides by plain, estuary or ocean, and its subsequent climate, which is perhaps more typical of Northern Europe, create a verdant paradise where ornate palaces lie hidden behind tall trees and walled gardens, history abounds and romantics feel that they have at last found their nirvana.

Hans Christian Anderson found inspiration here, describing Sintra as the "most beautiful place in Portugal" and Lord Byron during his time here christened it his "glorious Eden". However, perhaps the most distinguished homage is paid by Portugal's national poet, Luís de Camões, in his epic poem Os Lusíadas.

From the train station, the vila is a 15 minute walk away or a small taxi fare, passing the blue and white tiled housing of a natural spring where locals queue to collect cool water from the hills. Alternatively, horse drawn carriages transport up to 5 people around Sintra for a fairly reasonable price. Once in the vila, each of the windy and narrow medieval streets leads to a treasure; be it one of the many dilapidated town houses exuding airs of past glories or the Toy Museum with its enormous collection from over many decades. Craft shops sell a host of local artisan specialities and a range of cafes and restaurants cater well for all even in peak months. For the sweet toothed, two local pastries stand out; the Queijadinha is a small soft-cheese based tart and the Travesseiro a sweet fruit filled pillow eaten warm. 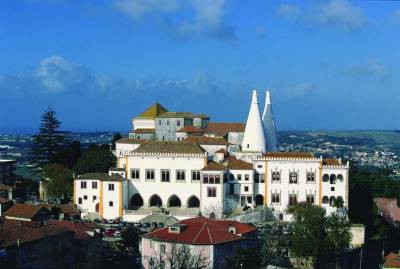 In the centre, and an obvious landmark with its two enormous white chimneys, the Palácio Nacional de Sintra was a functioning royal palace until the early 1900s. Originally built under Moorish rule for sultans spending summers in the temperate serra, the palace has been remodelled and altered by successive residents. Though predominantly Manueline and Gothic in architecture, the original Arab style still prevails in some parts of the building.

Certain rooms stand out because of their uniqueness and splendour. The Room of Swans is one example, its octagonal panelled ceiling decorated with paintings of the white bird of its name. Similar is the Room of Magpies, however the intricate décor here is connected to a tale of gossiping courtiers. Legend has it that King João I ordered the painting of magpies, the chattering bird, as a message to the ladies of the court whose whisperings of intrigue were distressing both him and his English Queen, Philippa of Lancaster. The Armoury (Sala dos Brasões) is richly decorated with the coats of arms of the Portuguese aristocracy and still shows evidence of the pacing of the imprisoned Dom Alfonso VI in its worn floor. 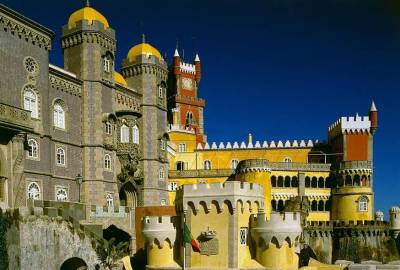 The Palacio da Pena is an extravagant yet relatively modern building, erected in the 19th century in accordance with the whims and romantic fantasies of Ferdinand de Saxe-Coburg-Gotha, the German husband of the then Queen Maria II. A true mixture of styles (Renaissance, Baroque, Moorish, Gothic and Manueline) adorn this enormous construction which occupies the site of a 16th century Hieronymite monastery, proudly sitting atop the hill behind the Vila de Sintra, at a height of 1500 metres. The outside evokes Disney in that its pink and yellow towers and domes boast drawbridges, sculptures and detail that one can only imagine exist in fantasy. Inside has been kept very much as it was left by its last royal occupant, Queen Amélia who, fearing the inevitable downfall of the monarchy in Portugal, fled the palace and the country in 1910. The panoramic views from the courtyard here are breathtaking. If the hike up to the palace doesn't appeal, a taxi or bus is available. However, the walk back down is worth the effort as it gives the visitor a chance to take in the cool beauty of the wooded hills and see the extensive park belonging to the palace, which is impressive in its design and array of plants; credit once again to Ferdinand. 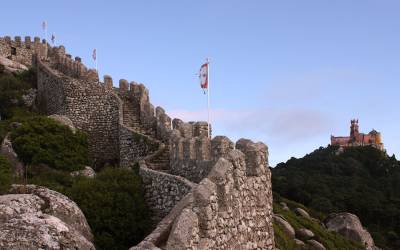 Included on the list of places to see must also be the palaces of Seteais and Monserrate. The former, a neo-classical building with a grand archway, is now a luxury hotel and hosts ballet in the summer. The latter is an extravagant mixture of European and Oriental architectural styles with a highly decorated tower, domes and much ornate detail. However, Quinta da Regaleira is particularly special and has UNESCO world heritage status as testimony to this fact. Situated amongst dense woodland, its eerie turrets and nooks and crannies lend it an air of mystique added to by underground grottoes and two dry wells. One, 60m deep, is accessed by a spiral stone staircase and bears symbols related to the Knights Templar and the Masons, as do many other parts of the property. All this together with its lush gardens make it a unique place to visit. 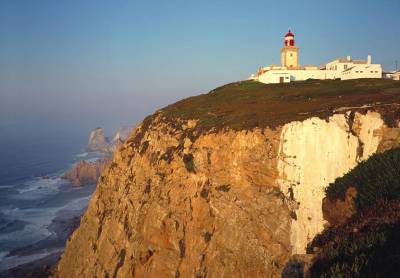 Also high in the hills, the remains of the Moor's Castle date from the 8th century and marvellous views are attained by walking along the top of its walls. Looking westward from here, one is reminded that Sintra is near the coast and many beautiful beaches lie only a short drive away, or indeed a tram ride away, as an old-fashioned eléctrico tram service ferries people from Sintra to various villages and the charming Praia das Maçãs all year round. Praia Grande is a popular beach with the young. Surfers come to ride its quality waves, and both national and international competitions are held. A host of other, perhaps less well-equipped beaches, litter this area each offering its own beauty and charm – such sandy coves include Azenhas do Mar, Praia do Magoito and Adraga.