Possibly the most famous fishing town in Portugal, Nazaré is unique in many ways. It doesn’t contain the architectural treasures or grandiose monuments prevalent in other Portuguese towns, but it has an atmosphere of times gone by, contentment and traditions which continue to thrive, which make it a special place to visit. 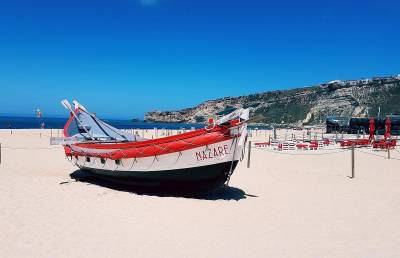 The wooden fishing boats still used today are colourful and narrow with curved prows and decoration evocative of the first fishermen of the area; the Phoenicians, who settled here in pre-Christian times. On some prows you’ll even still see a watchful eye painted – in theory to detect the two most important things to a fisherman; shoals and storms – and many dangle lamps for fishing after sunset. The Casa Museu do Pescador (R. Sousa Lobo) is a small museum dedicated to the fishing population of Nazaré. Contained within a traditional cottage, it has been lovingly restored to show the exterior and interior of the home of a typical fishing family for the early part of the 20th century.

Another tradition which doesn’t date as far back as the original settlers but is nonetheless quite unique is that of the seven skirts of Nazaré. Fisher women here still wear seven colourful layers of skirts, as well as wooden clogs and a predominantly black headscarf. It is said that they represent the seven days of the week, the seven colours in the rainbow, the seven waves in a set and many other biblical, mythical and magical attributions which involve the number seven. Their arrival on the fashion scene in Nazaré is attributed to the fishwives of old who would await the safe return of their men on the beach in cold, wet, and windy conditions, developing the multiple layers to keep warm. The number finally settled on only reinforcing the notoriously superstitious character of seafarers and their families. These women and the fishing industry they support are celebrated in a Monument to Nazare Women in the Largo dos Cedros. 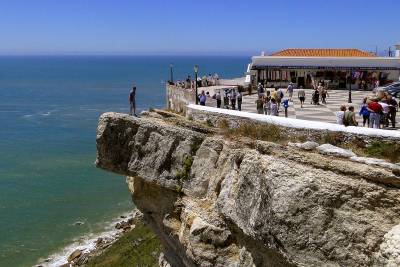 Nazaré is split into three main districts – Praia (meaning beach), Pederneira and Sitio. Located on a rocky promontory over 100m above the main part of the town, Sitio provides wonderful views over the bay and beach of Nazaré, and from here the walker can continue northward along the stretches of beach where the Atlantic regularly pounds creating ideal conditions for many a shore fisher to cast a line. Although this mainly residential part of Nazaré is accessible by car, by far more interesting is the funicular carriage which takes passengers up the sharp slope for a small fee. A winding path also exists but is perhaps more appealing on the way down! Once at the top, besides the views one finds a large church and also a small chapel clinging to the edge of the sheer drop, the Ermida da Memória, whose origins are closely connected to the miraculous appearance of the Virgin Mary. 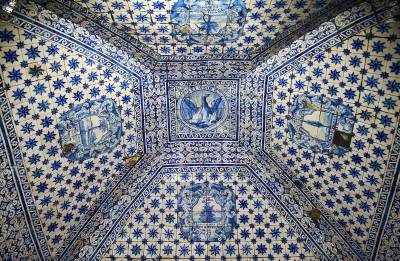 The legend goes that one misty morning in 1182, local nobleman Dom Fuas Roupinho was hunting and realised at the last moment that he had in fact chased his deer to the very edge of the cliff. Just as he too was about to fall to his death, he cried out to Our Lady of Nazaré who appeared before him and halted his horse. In honour of this life-saving miracle, Roupinho ordered a chapel to be built. Over the years it has attracted many pilgrims and today visitors can still see the tale depicted in hand painted azulejos and even the supposed footprint of Roupinho’s horse engraved in a stone found in the crypt below the chapel.

Along the seafront of Nazaré, people still dry their catch of fish in the sun and mend their boats alongside sunbathing holidaymakers and playful children enjoying the many attributes of the beach. A throng of craftshops and cafes stretches the length of the Avenida Marginal, as well as restaurants serving a great variety of the local speciality, which is of course fish. Caldeirada à Nazarena is a rich fish-based stew typical of the area, and fresh ingredients feature strongly on menus often offering the ‘catch of the day’. 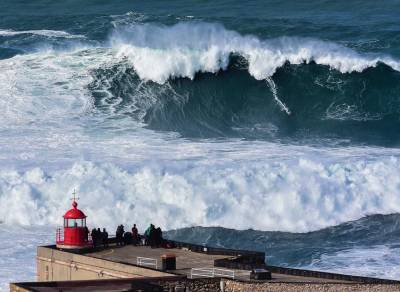 Around 8 km to the south is the beach of São Martinho do Porto. Situated in an almost closed circular bay, this beautiful and unspoilt beach is very popular among families with small children because the Atlantic is less ferocious here and the average temperature of the water tends to be higher than elsewhere.

Nazare has been a popular beach resort among the Portuguese for many years now and this is unsurprising given the town's fantastic stretch of golden sand. Over recent years though, it isn't just holidaying families who have been drawn to the coast around Nazare, but some of the world's best and bravest surfers. Long regarded as the home of big wave surfing in Portugal, Nazare has recently put itself firmly on the global map with the biggest waves ever ridden being surfed here. In January 2018 Hugo Vau rode a record-breaking 35 meter (100ft+) wave at Praia do Norte.